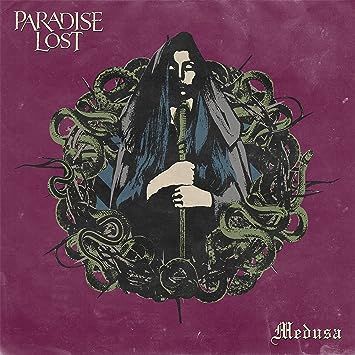 I’m late to the Paradise Lost party.  An exhaustive Decibel article a few years ago inspired me to pick up Gothic, which I enjoyed quite a bit, but I did not pursue them any further.  I think my bad experience with Anathema (who sucks, guys, c’mon now) kept me away from the doomdeath/gothdeath scene.  Which may have been a mistake, because after everyone lost their shit over Medusa last year, I scooped that up and things suddenly started clicking.  It is fucking GREAT, and I am truly hooked now, giving Shades of God and Icon a few spins and excited to seek out more.

I was just getting into Medusa when this tour was announced.  It was welcome news because The Atlas Moth was opening and I had to miss their previous Empty Bottle show with Royal Thunder (which I’m sure was amazing, that’s a crazy bill).  But fuck, I missed Atlas Moth again here, so I have nothing to say about their performance other than Coma Noir is amazing and everyone should buy it.  They are a different band from their first 3 records on this one.  Sanford Parker apparently figured them out more than they could for themselves, and their new iteration has put out the best record this year.

Thankfully I was able to make it in time for the headliner, and more thankfully, the House of Blues was NOT sold out.  Now I want as many fans to come to these shows as possible to support the bands and all that good shit.  But as anyone who has ever been to the House of Blues knows, that place is one of the worst places on earth when it is sold out.  Not just concert venues.  Places, generally speaking.  Good luck moving an inch ANYWHERE on the floor–no beer, no bathroom, no breathing.  Plenty of needless pillars fucking up your sightline.  And an incredibly narrow viewing area?  Check.  Fuck this place.

But with the floor nice and open and conditions humane, this was one of the better experiences I’ve had at a smaller show this year.  A lot of that has to do with the professionalism of the band–pacing, stage presence, setlist, all of it.  The sound was a little spotty early, but they sorted that out in time for Greg MacKintosh to fuckin drill the lead on “Blood and Chaos” from the new one, and I was locked in from that moment.  The weight of each tune, the way they are able to make their songs feel like their own separate events in a set, is not a common skill in metal–outside of the obvious ones like Maiden, its really just Enslaved (when not just playing the new record), Opeth and Amon Amarth that spring to mind.  Paradise Lost has this, and it allowed the uninitiated like myself an easy in.

Another thing I wasn’t expecting was the sing alongs, though maybe that was more down to not being grounded in their more goth period.  “Say Just Words” was a lot of fun though, and there were a couple other moments of audience participation that I’m sure go smoother in Europe where the fans are typically more engaged.